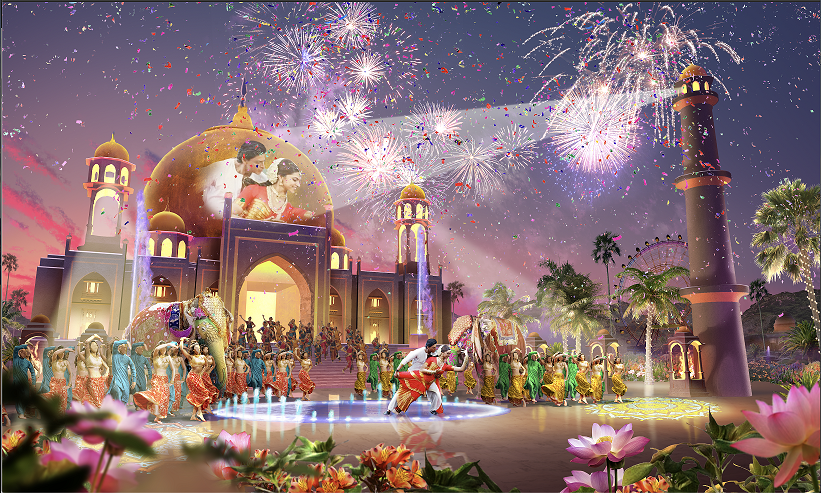 BACK TO BLOG
Exploring India’s Future of Entertainment

Rising income and an evolving lifestyle have contributed greatly to the growth of the amusement and theme park industry in India. Studies show that the industry is going to continue to grow at an astonishing rate thanks to investments from global leaders who see vast potential in the region. But what exactly will this look like?

In this article, SDC’s Regional Business Development Director – SEA & India, Ayush Ranjan discusses the growth and future of India’s entertainment market and the challenges that are affecting the industry. Ayush is a trained landscape architect and an accomplished business development representative who has worked on multiple entertainment destination projects including theme parks, water parks, and FEC’s in South Asia, including India and Bangladesh. Prior to joining Scruffy Dog, Ayush was working with Ernst & Young in India, where he managed the tourism master plan for a 300 ha. EcoTourism Hub in India. Prior to that, Ayush worked at experience design company Forrec as regional director. Here’s what he had to say on India’s future of entertainment…

How is the family entertainment market in India, compared to ten years ago?

AR: The amusement and theme park industry in India is relatively new when compared to its origin in the USA & Europe. This industry found its roots in India during the mid and late 1980s. The leisure industry mainly consists of amusement parks, malls, family entertainment centres (FECs), and multiplexes. The present consumer base is estimated to be around 30 million people. During the last decade, domestic tourism had grown 14% on average and is currently estimated at 527-million. Out of this, the amusement park industry generated a footfall of only 15-million during 2018. The current market for leisure is estimated to cross 1 billion USD in the next few years.

Where do you see growth, any areas?

AR: I see growth in the following areas…

What has attributed to this growth?

AR: One of the key factors has been the influence of the Indian media industry as a result of rising income and evolving lifestyle. According to an EY report, the Indian media and entertainment (M&E) sector stood at Rs. 1.38 trillion (~ US$ 18 billion) in 2020 and is estimated at Rs. 1.79 trillion (~ US$ 24 billion) in 2021. Further, it is projected to grow to Rs. 2.23 trillion (~ US$ 29 billion) by 2023, due to the acceleration of digital adoption among users across geographies. The market is projected to increase at a CAGR of 17% between 2020 and 2023.

In FY20, digital and online added revenue stood at Rs. 26 billion in the M&E sector and their contribution to the sector increased to 23% in 2020 from 16% in 2019. Within the M&E sector, Animation, Visual Effects, Gaming, and Comic (AVGC) sector is growing at a rate of ~29%, while the audio-visual sector, which is rising at a rate of ~25%, is recognised as one of the champion sectors by the Government of India. Media is consumed by audiences across demographics and various avenues such as television, films, out-of-home (OOH), radio, animation, visual effects (VFX), music, gaming, digital advertising, live events, filmed entertainment, and print.

Where do you see the future of India’s entertainment industry?

AR: According to EY report – the Indian amusement park sector, which is currently valued at USD 400 million (INR 25 billion) is at a very nascent stage when compared to the USD 25 billion (INR 1,675 billion) global amusement park segment. The sector presently is on a verge of transition in India, with various large investments proposed in the theme park sector both on Public Private Partnership (PPP) basis and by private players.

A total of approximately USD 4.5 billion (INR297 billion) is proposed to be invested in the Indian amusement park sector in the near future. Industry experts believe that the majority of proposed investments are expected to follow the PPP model which would allow the private players the required support from the government in terms of land acquisition, incentives, taxes, and so on for the development of such large capital intensive projects. As well as this, the sector is making significant investments in technology to develop products/themes that significantly enhance customer experience and participation. For instance, augmented reality (AR) and virtual reality (VR) have become areas of significant interest and investment in recent times. Current Theme Parks like Essel World and Imagica are in the process of adding more VR related attractions to their offering.

It is projected that strong enablers such as rising income levels will lead to increased discretionary spending power, increasing domestic and international tourism, rising urbanization, and demographic advantage (higher percentage of working age group). This will help the sector register a Compounded Annual Growth Rate (CAGR) of 19 percent over the next five years.

India has strong culture and heritage, is there a trend for visitor attractions that embraces this?

AR: Until now, design trends in Theme Parks and FEC’s in India have been following the trends in the USA / Europe, which is developing projects that focus on thrill and adventure. IP’s have not been used so much in this industry until now.

However, in the last few years, some organisations and institutional bodies are attempting to create Visitor Attraction projects which aim to create a larger role for culture & heritage beyond entertainment.  These VA are more focused on creating cultural experiential projects which dwell on developing both educational and spiritual content.

Budgets on these projects are substantial compared to other Visitor Attraction projects of similar scale and size.

Are there any other trends emerging?

AR: New Trends which have been observed include…

Are there any challenges that affect India’s Entertainment Industry, and how can these be overcome?

AR: Of course, there are challenges that come with every industry. Here are some of the most prominent…

Please let us know of anything else you feel is relevant.

AR: Sure! Here are just a few things that come to mind…

At Scruffy Dog Creative Group, we take a strong interest in the status of the entertainment market all around the world. We find the development of the amusement and theme park industry in India really exciting. There is vast potential in the region and organisations are truly starting to notice that… this is just the beginning!

We have vast experience in developing projects for organisation all around the world.  In India we are currently working on several projects that include Northwood leisure project, and a spiritual theme park, so watch this space!